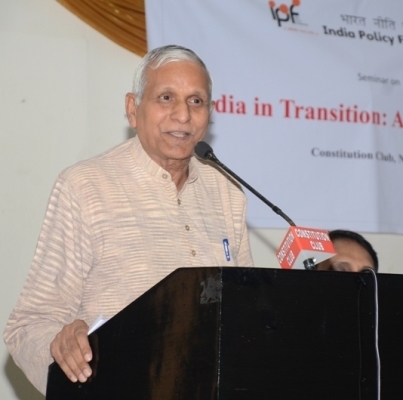 Dr. Bajrang Lal Gupta
Dr. Bajranglal Gupta was the founder Chairman of India Policy Foundation.
He did his post-graduation in Economics from Rajasthan University, Jaipur and received his Ph.D. from Kurukshetra University for his thesis on ‘Value of Distribution System in Ancient India’ in 1985.
With a long career in academics behind him, he retired as Associate Professor from Delhi University in 2005. He has written several books, innumerable articles, monographs, and papers. His notable publications include “Bharat ka Aarthik Itihas” or Economic History of India (Haryana Sahitya Academy, Chandigarh), Value and Distribution Systems in Ancient India (Gyan Publishing House, New Delhi) and Hindu Arthachintan or Hindu Economic Thought (Bharatiya Vichar Sadhana, Nagpur). Several books on Economics authored by him are prescribed as textbooks from high school to university level. He has been a frequent contributor of articles and essays in several newspapers, magazines, and journals. He has a deep understanding of Indian socio-cultural issues in addition to his vast knowledge of the Indian economy.
Dr. Bajranglal Gupta has been a guide and mentor to innumerable academicians, researchers, writers, activists and policymakers. He has given hundreds of keynote addresses at various universities and other academic bodies. He is also regularly invited to speak at seminars, conferences and important events. 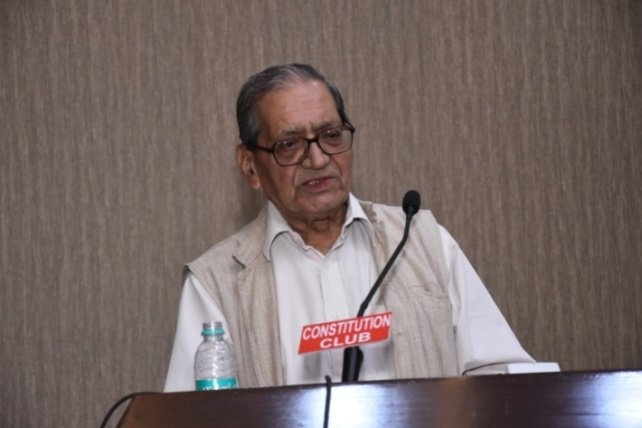 Prof. Kapil Kapoor
Professor Kapil Kapoor is the Chairman of India Policy Foundation. He is a globally renowned scholar of linguistics, literature, religion and Indian Knowledge Traditions. Presently, he is Chairman of Indian Institute of Advanced Study, Shimla (H.P.). Before that he was Chancellor of Mahatma Gandhi Antarrashtriya Hindi Vishwavidyalaya, Wardha (Maharashtra).
He was Professor of English at Centre for Linguistics and English, and Professor of Sanskrit at Centre for Sanskrit Studies, Jawaharlal Nehru University, New Delhi. He also served as the Pro-Vice Chancellor of Jawaharlal Nehru University.
During his research and teaching spanning more than five decades, he has mentored many doctoral and research scholars who are contributing as academics, administrators, and policy makers. He has been a visiting professor and speaker in many universities and conferences around the world. He is an editor of Sahitya Academy sponsored Encyclopaedia of Indian Poetics, a UNESCO project; and Editor-in-Chief of Parmarth Niketan/Indian Heritage Research Foundation (USA) sponsored 11-volume Encyclopaedia of Hinduism. He has also written several scholarly books and research papers.
Positions
Awards
Academic / Research /Administration Experience
Teaching Experience: 59 years - been teaching since 1960;
Research Experience:
Publications and Research
Books and Monographs:
Monographs
New Publications 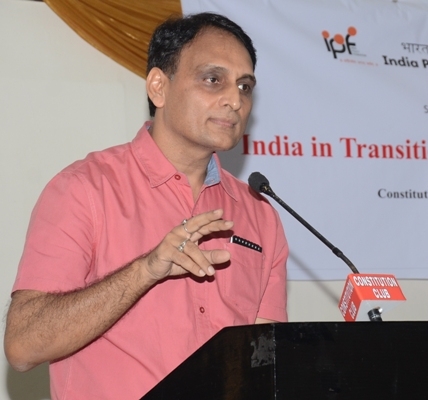 Dr. Rakesh Sinha
Dr. Rakesh Sinha was the first Director of India Policy Foundation. Few months after formation of IPF Trust, the Trustees gave him the responsibility of IPF honorary director and he worked at IPF for nearly a decade till he was nominated to Rajya Sabha by the Honourable President of India.
He is a prolific writer, speaker, debater and now a prominent parliamentarian. He has been the University topper and has obtained his PhD on ‘Ideological and Organisational Transformation of CPI (M)’. Armed with an excellent academic record, Dr. Sinha has written several books and monographs including the biography of RSS founder Dr. K.B. Hedgewar. Other prominent books written by him are ‘Sangh aur Rajniti’, ‘Rajniti aur Dharmnirpekshta’ and ‘Secular India: Politics of Minorityism’. His articles on contemporary issues have regularly featured in newspapers and magazines and he is a well known participant in discussions on national and international news channels.
﻿